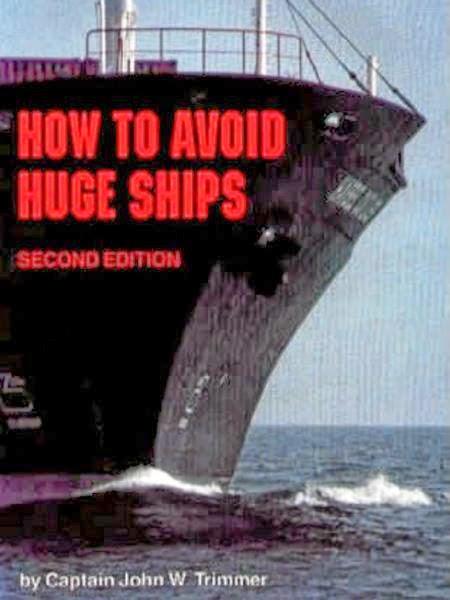 How much would you pay for a joke?

Or, for that matter, if you were a captain of a small boat which frequently traveled in the ocean paths of tankers, cruise ships and aircraft carriers, how much would you pay for helpful guide like this one?

Of course, the reason for the purchase doesn't really matter.  After all, it's a matter of supply and demand with the supply being extremely limited. (Cornell Maritime Press no longer exists.)

And, if you want a few laughs, you'll want to troll through the reader's reviews at the Amazon page. Among my favorites (though I must admit, I didn't go too far down the list of over a thousand entries!) are these:

* Given that there is a huge ship bearing down on me RIGHT NOW I am extremely disappointed that I cannot get instant download.

* I bought How to Avoid Huge Ships as a companion to Captain Trimmer's other excellent titles: How to Avoid a Train, and How to Avoid the Empire State Building. These books are fast paced, well written and the hard-won knowledge found in them is as inspirational as it is informational. After reading them I haven't been hit by anything bigger than a diesel bus. Thanks captain!

* Captain Trimmer presents a rather novel technique for avoiding huge ships - move your boat out of the path of the huge ship. I know what you're thinking, this goes against conventional wisdom, but Trimmer presents significant empirical evidence to support his theory. Indeed, over the long run, moving out of the way will dramatically decrease the number of huge ship collisions you will have to endure in your daily life.

* I was very excited to find my copy of How to Avoid Huge Ships in the mail three months ago. However, I was very disappointed regarding the length of this "book". The book begins with a lengthy forward as well as a dedication followed by only 2 chapters....Chapter 1. Turn Left-----And Chapter 2. Turn Right. While statistically accurate and fundamentally helpful, the two chapters really left me wanting more. However, I was satisfied with the results of the book seeing as I have not had any encounters with huge ships since.

* Read this book from cover to cover. Still got hit by a huge ship. Am very disappointed in misleading title.

* I have read this book three times and I am still running into HUGE ships. I feel like I understand the concepts detailed in the book, but seem not to be able to apply them while on the water.

* If you only buy one book on avoiding big ships this year then it should be this one. In a world awash with a plethora of inferior and mediocre large vessel evasion media this tome is simply the apex. A must buy for the big ship avoiding enthusiast in your life

* The good captain's earlier works Steer Away from Lighthouses and The White Whale: A Case for Letting Go were both very important additions to the sailing lexicon. This book is no different, giving invaluable advice to those of us who have spent many leisurely boating trips dashed under the prow of huge ships. That being said, the slogan "If you buy this you will miss the boat!" is not helping sales.
Posted by DH at 1:02 PM