A New Book from Conan Doyle? 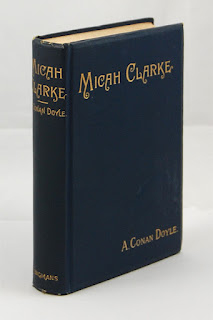 Like so many, I am unable to share Doyle's opinion for I believe that Holmes, the superb detective of 221B Baker Street, stands as perhaps the greatest, most fascinating fictional character of all time.  Nevertheless, I do like Doyle's other fiction and have enjoyed many hours reading (and re-reading) the exploits of these other fellows.

Except for Micah Clarke, that is. The price of this rare book has always prohibited me from making his acquaintance.

Until now. For thanks to Project Gutenberg and Claire's Kindle, I am enjoying making Micah's acquaintance -- and not for the $90 (plus shipping) that I first found on Amazon, but for free.

Micah Clarke was Doyle's first entry into the field of historical fiction and so far I'm pretty impressed. I'm less than a third of the way through the novel and so the Monmouth Rebellion, the religious conflict which broke out in northern England in 1685 (and which provides the primary field of action for the novel), hasn't actually started yet. Still, several of the novel's characters have come into fine focus, adventures and dramatic situations have already occurred, and the prelude to the momentous conflict has been effectively described.

I'm excited to have a completely fresh reading from Conan Doyle. For historical detail, for superb characters and thrilling adventures, for insight into human nature and, let's remember, for exquisite writing, Conan Doyle must always rank high.

So, go ahead and see why Doyle was so perturbed that his great detective stole the limelight which he thought was more properly due to adventurers like Micah Clarke. Read it (for free) via Project Gutenberg.