Tolkien Talks to His Son About Sex, Marriage, and Fidelity 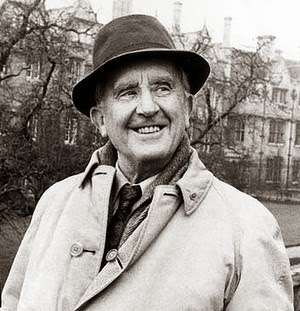 The astounding popularity of J.R.R. Tolkien and his writings–magnified many times over by the success of the “Lord of the Rings” films–has ensured that Tolkien’s fantasy world of moral meaning stands as one of the great literary achievements of our times.

In some sense, Tolkien was a man born out of time. A philologist at heart, Tolkien was most at home in the world of ancient ages, even as he witnessed the barbarism and horrors of the 20th century. Celebrated as a popular author, he was an eloquent witness to permanent truths. His popularity on university campuses, extending from his own day right up to the present, is a powerful indication of the fact that Tolkien’s writings reach the hearts of the young, and those looking for answers.

Even as Tolkien is celebrated as an author and literary figure, some of his most important messages were communicated by means of letters, and some of the most important letters were written to his sons.
Tolkien married his wife Edith in 1916, and the marriage was blessed with four children. Of the four, three were boys. John was born in 1917, Michael in 1920, and Christopher in 1924. Priscilla, the Tolkiens’ only daughter, was born in 1929.

Tolkien dearly loved his children, and he left a literary legacy in the form of letters. Many of these letters were written to his sons, and these letters represent, not only a hallmark of literary quality, but a treasure of Christian teaching on matters of manhood, marriage, and sex. Taken together, these letters constitute a priceless legacy, not only to the Tolkien boys, but to all those with whom the letters have been shared.

In 1941, Tolkien wrote a masterful letter to his son Michael, dealing with marriage and the realities of human sexuality. The letter reflects Tolkien’s Christian worldview and his deep love for his sons, and at the same time, also acknowledges the powerful dangers inherent in unbridled sexuality….

Excerpt from Albert Mohler’s essay, “From Father to Son: J.R.R. Tolkien on Sex.” Read the whole essay on Mohler’s blog right here.
Posted by DH at 10:46 AM