The American Revolution's Frontier War: "Drums Along the Mohawk" 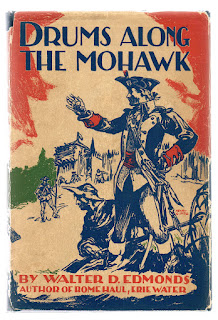 A couple of nights ago, I finished reading Walter Edmonds' Drums Along the Mohawk, his classic story of the western frontier during the Revolutionary War. It was not an easy read -- it's a long book (my paperback copy was nearly 500 dense pages) and it's full of troubling scenes of savagery, heartbreak, injustice, vengeful violence, incompetence. And there is very little in the way of religion or even patriotism to give perspective (let alone comfort) to the hard lives led by the characters.

Nevertheless, I am very glad I read the novel. I found it well-written, well-researched, and full of insightful detail about a theater of conflict in the Revolutionary War that is usually overlooked. I've studied the war from several angles over the years but I learned a great deal from Drums Along the Mohawk. Even more important, Edmonds caused me to feel the frustration, fear and angst that the frontiersmen endured during those tumultuous years.

The plot of Drums Along the Mohawk revolves around the lives of newlyweds Gil and Lana Martin, settlers in the Mohawk Valley of the New York frontier during the American Revolution. They are befriended by the widow McKlennar and Native American ally Joe Boleo, but they must face a confusing, fearsome war with the Indians, British, and Tory Americans. Along the way, the novel brings in actual historical personages and events: General Nicholas Herkimer, Adam Helmer, Walter Butler, the Battle of Oriskany, the Attack on German Flatts.

The novel (written in 1936) was a bestseller and inspired one of 1939's biggest movie hits.

With some reservations (particularly about certain violent scenes), I recommend Drums Along the Mohawk as an excellent historical study, an intense page-turning adventure, and as a human interest novel.
Posted by DH at 9:38 AM