Looking for a Good Book? Start with a Good Review. 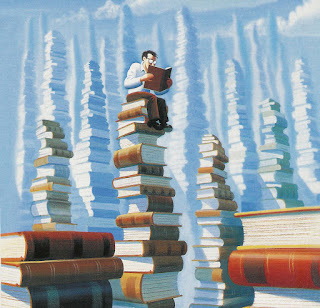 Looking for a book review? I've got a few to consider.

1) Over at City Journal, Michael Anton looks at the incomparable Tom Wolfe’s latest novel, Back to Blood, an exploration into the anger, angst and devolution of civilization which comes with America's mindless mania for "diversity." Anton has a lot he doesn't like about Wolfe's book (and reading Wolfe is never a walk in a park) but he thinks there's a lot more good there (even genius) to let it alone. The review is called, "A Tribal American Future?"

2) Gina Dalfonzo from BreakPoint Blog (and other venues) gave 3 copies of Karen Swallow Prior's new book as Christmas presents this year. She must think it's a good read, huh? The title is Booked: Literature in the Soul of Me by Prior, a professor of English at Liberty University and "a writing buddy" of Gina's.  And it's subjects are "simultaneously a spiritual memoir and a tribute to the books that have shaped her life." Here's the rest of the review.

3) Paul Mirengoff over at Power Line alerted me to a book I definitely need to get, President Grant Reconsidered by Frank Scaturro. However,  the review alone is extremely interesting as Mirengoff argues that the reasons Grant's presidency has been so roundly condemned are related much more to the unfair political biases of the historians than the raw history itself. Very good stuff.

4) Just Send Me Word: A True Story of Love and Survival in the Gulag by Orlando Figes is reviewed by Francis Phillips over at Mercator. This new book comes from the discovery of 1500 love letters written by Lev and Svetlana Mischenko between 1946 and 1954, the years Lev was imprisoned in a cruel Soviet prison camp. The miraculously preserved letters, "all uncensored due to an elaborate smuggling system devised by Lev at the Pechora wood-combine near the Arctic Circle, where he worked as a slave labourer…have significant historical value as research material about the post-war regime in camps like Pechora." I guess. And human interest as well. Check it out.

5) Building on Marshall McLuhan’s oft-quoted dictum that “the medium is the message," Nicholas Carr's new book, The Shallows: What the Internet is Doing to our Brains, asks how the internet is changing the way our brains receive, process and store information. Robin Phillips reviews the book for the Alfred the Great Society here.