The Perils of Shangra-La: A Review of James Hilton's "Lost Horizon" 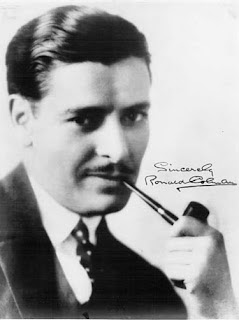 It had been a long time since I had seen the 1937 movie Lost Horizon, but I certainly remember it as a pleasant utopian kind of flick. But then, I tend to like just about any movie that stars Ronald Colman. After all, though John Barrymore was Hollywood’s classic profile and Betty Grable its million-dollar legs, the most distinguished, fascinating voice ever transcorded in Tinsel Town was that of Ronald Colman. He was a most capable actor – check out the breadth of his talents in such varied films as A Tale of Two Cities, The Prisoner of Zenda, If I Were King, Kismet, The Late George Apley, Random Harvest, and A Double Life, for which he won the Oscar – but it is always his elegant, precise voice that stays with you. Indeed Claire and I enjoy listening to recordings we have of Ronald Colman (literature readings and old radio shows) as much as we do watching him in film.

But Ronald Colman isn’t actually the reason for this post nor is it the Frank Capra film, Lost Horizon. No, the reason for the entry is my recent reading of the 1933 James Hilton novel on which the film was inspired. And my experience of the novel was of a much different character than what I remember was elicited from the movie. In fact, whereas the movie produced a dream-like paradise, the novel produced something much more in the character of a nightmare. For although the setting of Shangri-La offered a serene, contemplative escape from the turbulent injustice of the outside world, it required an awfully steep price; namely, freedom itself.

Other 20th Century novels have portrayed this unequal (and ultimately unworkable) exchange, but the force behind the utopian enslavement in those books was either totalitarian politicians or overreaching scientists. In Lost Horizon, however, the temptations of paradise come from the combination of extreme longetivity, submission to a syncretistic religious mysticism, and the unapproachable remoteness of Shangri-La.

Such a paradise is more than enough for Hugh Conway, the novel’s protagonist, a capable yet cynical civil servant, whose idealism, ambition and perhaps traditional religious faith had been profoundly shaken by his war experiences. However, others do not share Conway’s embrace of Shangri-La. They see in it only a prison, padded and pampered as it may be, but still a prison to be escaped. Despite the long, idyllic life promised in Shangri-La, the price of personal liberty for the young Mallinson and the love he discovers there, is just too high.

Most critics treat Lost Horizon as an argument that world peace and spiritual fulfillment must come through a denial of materialism, personal ambition, religious dogmatism, and even the traditional commitments to marriage and the home. However, I believe that Hilton was presenting a much subtler and profound argument; one that acknowledged the temptations of such a paradise but which ultimately encourage the reader to prefer natural humanity (with all its flaws, failures and deep longings) to the utopian entrapment of Shangri-La. 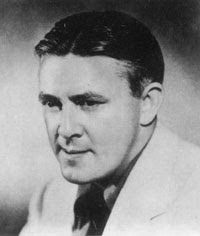 Hilton [shown at left] does an excellent job in showing the tension that such a temptation would create. And his working of plot is masterful as he slowly, imperceptibly moves the reader from identifying with the seeming hero Conway to the impatient, independent Mallinson. And the twist…no, make that two or three twists...in the novel’s final pages also demonstrate Hilton’s skill as a storyteller and provocateur.

I am going to again nominate Lost Horizon for the reading list of the Notting Hill Napoleons because I think it is an exciting, stimulating read and because I would relish the subsequent discussion about freedom, love, idealism, eastern religion, utopian literature, and more. But visitors of The Book Den don’t need our November deliberations to go ahead and grab a library or used copy for yourself. See what you think of Shangri-La right now.

Oh yeah. Here are a few trivia tidbits about James Hilton, Lost Horizon and even the 1937 film that I thought you might enjoy:

* Zhongdian, China, has long claimed to be the locale that inspired the novel and, in fact, officially changed its name to Shangri-La. 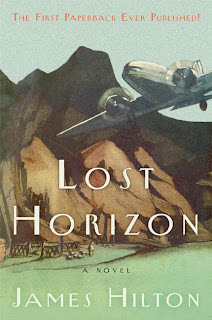 * Lost Horizon only became popular after the success of Hilton’s novel, Goodbye, Mr. Chips, published in 1934. But when Lost Horizon did take off, it did so in a big way when it was published in paperback. Indeed, it was Pocket Book #1, the book that launched the paperback revolution. (Note -- While I believe this to be true, it should be pointed out that the paperback books which went on to win that revolution were the Erle Stanley Gardner Perry Mason mysteries!)

* Franklin D. Roosevelt named the Maryland presidential retreat Shangri-La, but it was renamed Camp David by Dwight Eisenhower after his grandson.

* The 1937 film Lost Horizon also starred Jane Wyatt, Sam Jaffe and Edward Everett Horton. After a public preview of the film which resulted in especially harsh criticism, Frank Capra personally presided over the destruction of the whole first reel of the film by fire. There remains today a lot of missing footage from the original.

* James Hilton (1900-1954) was an Englishman whose success included several best sellers which, in turn, were inspirations for successful films. Hilton won an Oscar for his work on the screenplay of Mrs. Miniver. He also hosted CBS Radio’s The Hallmark Playhouse from 1948 through 1953. 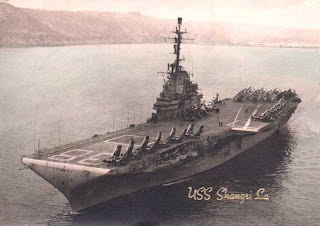 * An American Essex aircraft carrier was named Shangri-La, commemorating the 1942 raid on Tokyo by bombers led by Jimmy Doolittle. (FDR had made the remark that the planes had flown from a secret base in, you guessed it, Shangri-La.)
Posted by DH at 6:44 PM