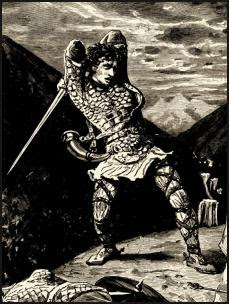 There is hardly a comparative value between the epic 8th Century battle at the pass of Ronceveaux which Dorothy Sayers treats in her masterly translation of The Song of Roland and the discussion over the narrative poem held by the Notting Hill Napoleons last Saturday night, but I’m almost tempted to try. After all, both involved…

No. No, I’d better not get into it any further. Let’s just say that some admired, appreciated and enjoyed the dramatic narrative...um...more than others and leave it at that.

Just write a bit about the book, Denny.

Good idea. And comfortably done, in fact, as I was one of the Napoleons who very much liked The Song of Roland. I did when I first read it a couple of years ago; I did when I seconded Quint and Carol's nomination of it for our reading list last November; and I did even more so after re-reading it last week.

It is a small work really – 150 pages in my Penguin Classics paperback – but within it are packed an awful lot of things to relish. There is the adventure; the history turned into morality-bearing legend; the insights into human nature (not always bright and beautiful); the vividly drawn heroes and villains; the ever-timely conflicts between Christianity and Islam and, even more universal, between individual virtues and vices. And always, the superb language co-crafted by the unknown ancient bards and the incomparable Dorothy Sayers.

The basic plot is probably well known to many of you but, in keeping with the tradition of The Book Den, I do not want to “let loose” anything that would detract from the first time reader’s enjoyment. But it certainly doesn’t hurt to explain that the story involves the great medieval hero, Roland, and his desperate rear-guard defense of the French army against the Saracen hordes from Spain and beyond. Sharing the stage with him are his trusted friend and my favorite personage in the poem, Oliver; the fighting archbishop, Turpin; and Charlemagne himself -- all arrayed against the Moslem King Marsilion; the treacherous Count Ganelon and a host of other vaunted, valiant enemy warriors. 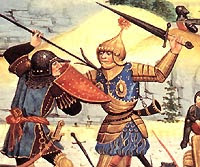 And, mind you, the stakes of this epic struggle go way beyond the strategic value of the Ronceveaux canyon. Indeed, the future of all Christendom hangs in the balance.

The significance of the battle fought by Roland and the Twelve Peers against Islam is, needless to say, as timely for Western civilization today as it was when the poets first began to sing about it. This fact alone should generate an interest by modern readers looking to find insights into the overreaching religious conflict of their day. And yet, The Song of Roland has more -- especially in its sage observations of human morality and conduct. Very insightful and challenging stuff.

And then, most wonderfully, there’s the poetry! Dorothy Sayers's The Song of Roland excitingly unfolds in language that is rich, lofty, meticulously crafted and eminently quotable, making it a read that gives both immediate as well as lasting pleasures.

The Song of Roland, this heroic saga, immeasurably enhanced by the expertise and sensitivity of Dorothy Sayers, is really a terrific read. And when you order your copy from the internet or public library, be sure to look for the Penguin Classics edition with Sayers's own splendid introduction. That will truly take it over the top.
Posted by DH at 8:30 PM