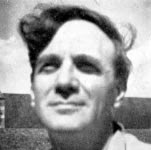 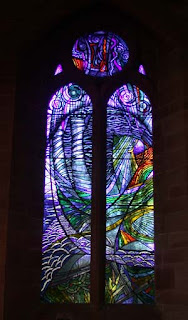 The work of Norman Nicholson (1914 -- 1987) has, like so many good things, gone out of fashion. And this moving poem, Shepherd's Carol, is an example of what we, most unfortunately, have lost. The poem reflects Nicholson's abiding concern for working men and for Christianity, concerns which colored most of his novels, plays and poetry.

If you'd like to know more about Norman Nicholson but can't afford the prices his very rare books now fetch, you might try these sites: 1; 2; and 3.

[Note: the stained glass shown at left is a recent addition to St George's Church in Millom. It is dedicated to the memory of Norman Nicholson there in the place where he worshipped. Christine Boyce designed the window using imagery based on Nicholson's poems and prose.]
Posted by DH at 1:09 PM