Against All Hope: Denny Reviews One of His Favorite Books 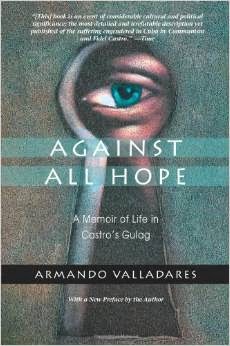 There are certain books reflecting the truth of one’s own time that carry so much weight, so much moral relevance that they are truly required reading. I believe that one of these books is Against All Hope by Armando Valladares, the powerful testimony of freedom, faith, and spiritual triumph written by a survivor of 22 years in Castro’s barbaric prisons. The book was written nearly 30 years ago but I find that re-reading it every few years helps keep my spiritual focus sharp and my counter-culture convictions strong.

Armando Valladares, like so many thousands, was an innocent victim of Castro’s paranoia and ruthlessness. Valladares was sent to prison simply for voicing his dislike of Communism. He wasn’t an agitator or a rebel; he had never taken part in any anti-government action at all. But it was the mere potential for opposition that Fidel feared so much and so into the prisons went businessmen, priests, soldiers who had fought for him (and for what they mistakenly thought would result in a free Cuba), students, preachers, laborers.

Thousands were herded into the grimiest, most horrific prisons imaginable. There they faced various tortures, including beating, starvation, lack of medical care, and innumerable other injustices -- including the ever-busy firing squads.

Valladares had looked forward to a prosperous career in the national bank before his arrest and lifetime sentence to prison. Castro ended those plans forever. His sentencing, moreover, was without any court procedure at all. Again, like so many others, Castro and his Communist gangsters decided Valladares was to become nothing but another brutalized political prisoner.

But it didn't work out that way.

In prison Valladares embraced the Christian faith (which had previously been but a nominal part of his experience) and allowed God to mold him into a prayerful and resolute freedom fighter. Through his survival, his refusal even under the most grueling tortures to join the “political rehabilitation,” his prayers and his poems, his nearly successful escape attempt, and his relationships with other heroes, Valladares’ spirit soared even though his weak, broken body suffered terribly. He was not a mere prisoner. He was a spiritual victor, proving the reach of even totalitarian thugs are limited by a human soul who responds to God's grace.

For 22 years, the hateful regime punished Valladares until international pressure finally forced their hands. Valladares, a survivor whose writings had already been smuggled out to the world, created enormous damage to Castro's lying propaganda, was finally released and deported to France.

But, like Alexander Solzhenitsyn, Armando Valladares kept his promise to his fellow prisoners (many already dead) to honor their bravery and spiritual ideals He would try to tell the world what life in Castro’s “workers’ paradise” was really like.

Against All Hope is that record and that alarm.

For anyone who wants to know the truth about Fidel Castro and the Cuban Revolution, for anyone honest enough to look into the face of Communism, for anyone who wonders what capacity for endurance and bravery can rise out of the abyss of corruption and cruelty, then Armando Valladares’ Against All Hope is the book to read.
Posted by DH at 1:22 PM