A Most Moving "Edwardian" Experience 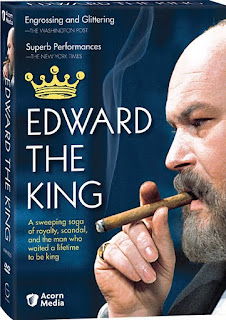 Among the best viewing pleasures we have had with Netflix options in recent months has been the sterling ATV mini-series from 1975, "Edward the King" starring Annette Crosbie as Queen Victoria, Timothy West as the adult Edward VII, Robert Hardy as Prince Albert, Helen Ryan as Princess/Queen Alexandra, Michael Hordern as Gladstone, John Gielgud as Disraeli and many other superb performances.

Both Claire and I found the long series enthralling. It's certainly better than most when it comes to historical accuracy (being conscientiously based on Sir Philip Magnus' excellent biography) and, as thoughtful and compelling viewing, it would be very hard to top. The writing, acting, editing, sets all represented a level of excellence that moderns rarely reach.

The 13-episode series is currently available on the Netflix instant download feature or via CD discs. We couldn't recommend it more highly.
Posted by DH at 11:20 AM