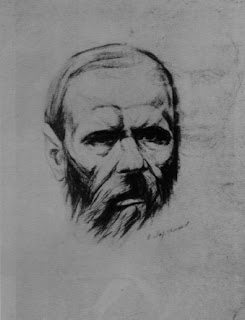 Man changes during the course of his life, especially spiritual men who embrace the need for change and moral improvement…men who understand that God’s sovereignty provides no excuse for one’s failure to deliver his own dedication and prayerful effort. But sometimes the changes that happen in a man’s life are not agreeable ones. Trials can mellow a man, give him greater humility and understanding, give him a more profound gratitude for the grace of God that comes through Jesus Christ. But sometimes trials can distract and deter a man from his early purposes and principles. They can even break his spirit and leave him cynical, morose, with only the murkiest of spiritual hopes…if that.

These thoughts spring from last weekend’s reading of “White Nights” and "The Dream of a Ridiculous Man” by Fyodor Dostoevsky. They are two brief reads (“White Nights” is 55 pages, “Dream” a mere 25) which represent Dostoevsky at opposite ends of his life.

“White Nights” was written in 1848. Dostoevsky was young and just getting started. He had high principles and firm hopes – both rooted in an optimistic socialism. He was a very emotional, introspective man (those traits never changed) but he was a believer in rationality, progress and the positive role a Christian could have in establishing meaningful relationships and in building a just society.

“White Nights” is a compelling love story that reflects these things. It isn’t an easy read for Westerners. Indeed, the lovesick protagonists are sometimes maudlin and verbose to a point most of us would believe silly, but one must remember Dostoevsky was writing to a culture that loved Pushkin’s and Gogol’s over-the-top emotional scenes too.

The story begins with a young recluse who has retired into a weird, introspective fantasy life after failing in normal relationships. He imagines passersby as his friends; he thinks of buildings as greeting him in his daily walks; he builds love castles in the air. But one day he fumbles his way though a strange circumstance in which he actually speaks to a girl. He loves her immediately and with all the stored up passion in his lonely heart. She eventually agrees to marry him until an unexpected twist in the story takes her back to a former suitor. It’s all a bit eerie and, on the surface, every relationship left in the story looks unhealthy and doomed.

But not so. For Dostoevsky describes the boy’s love, unrequited as it is, to be an ennobling, liberating, highly spiritual experience. And even in the Western reader’s uncomfortably with the story’s heavy emotionalism and perhaps a disappointment in the story’s conclusion (it isn’t a typical happy ending, that’s for sure), the reader is left with a genuine respect for Dostoevsky’s commitment to the exalting power of unconditional love. It is a bright and joyous tale even though the boy loses the girl (as a wife anyhow) because it reveals how sacrificial love has transformed the boy’s life into something beyond loneliness. He is now a man with a true heart, noble goals and involved in the real world.

But “White Nights” was written before Dostoevsky’s arrest, before the famed “almost execution” where he was minutes away from a firing squad, before prison, before his various illnesses. The changes wrought in the author's life by these grievous trials were profound. That emotional, introspective personality began to bend towards mystery, then doubt, then even to a fascination with the irrational and morbid. Though still deeply religious, the optimism and joy ebbed away and Dostoevsky instead plumbed the murkier waters of the fallen nature.

His contemporary Ivan Turgenev determined that Dostoevsky was the nastiest Christian he had ever known.

So by the time Fyodor Dostoevsky wrote “The Dream of a Ridiculous Man” nearly 30 years later, he was dramatically changed. This, the last short story he ever wrote, is a brief and bizarre tale about another reclusive dreamer and another chance meeting which changes his life. As the story begins, the protagonist (never named) is planning his suicide. He has ceased to think along rational lines but is guilty of overthinking nonetheless, trying to fathom the deepest motives behind his and others’ actions.

A crying child, panicked because of some catastrophe that has befallen her, appeals to the man. He shuns her, even runs away from her. But his subsequent examination of why he was so cruel and selfish distracts him from his suicide plans. He sleeps for the first time in days. While he sleeps, he experiences a wild dream in which he’s taken to another planet, an Edenic paradise where the inhabitants are all gentle, loving and pure. Yet the dreamer eventually contaminates this distant world and all of its inhabitants. They fall into sin as did Adam and Eve, allowing Dostoevsky ample opportunity to movingly describe, through this dream race, a bleak view of his own.

“They learned about shame and they made a virtue of it. The concept of honor appeared, and each alliance hoisted its colors. They started to torture animals, and the animals escaped into the forests and became their enemies. They fought to secede, for independence, for individual advantages, for what’s mine and what’s yours. They ended speaking different languages; they experienced suffering, and came to love; they declared that suffering was the only way to Truth. Then science spread among them.

They only dimly recalled the things they had lost and refused to believe that there had been a time when they were pure and happy. They even dismissed as ridiculous all possibility of return to that lost bliss, branding it a pipe dream. They were unable to visualize or conceive of it...

Religions appeared worshiping the nonbeing and self-annihilation for the sake of an eternal repose in nothingness.

Finally these people grew tired in their senseless efforts and suffering appeared on their faces. Then they proclaimed that suffering is beautiful because suffering alone contains thought. So they praised suffering in their songs. I walked among them wringing my hands in despair and crying over them. I believe I loved them even more than before the suffering had appeared on their features, when they were still so pure and beautiful. I loved their degraded earth more than I had loved it when it was a Garden of Eden, if only because sorrow had made its appearance in it. Alas, though I’ve always welcomed sorrow and torment myself, I was not happy to see them struck by it, and it made me cry...”

Near the end of Dostoevsky’s story, the man awakens from the dream. But it has caused him to be an even stranger, more manic personality than ever. In fact, he becomes a kind of preacher -- though he confesses that he doesn’t make much sense and is really quite unable to put into words the message of his dream. He is ridiculous to others and even to himself.

But he’s no longer suicidal. He’s not even lonely or unhappy. He now sees that true happiness, real spirituality is something which emerges from feeling, not thinking. He had been too tied up by rationality. Freedom came as he released himself to God. And God was to be found not in organized religion or divine revelation but from purely subjective sources...even from the subconscious or the surreality of a dream.

“The Dream of the Ridiculous Man” thus underscores (and very talentedly so) several of Dostoevsky’s philosophic themes from those last years of his life. Society is a sham, composed of hypocritical people and unjust institutions. Religion surely gives meaning to an individual’s life but is a religion that is subjective, incommunicable, supra-rational. Suffering, even when caused by wickedness, is a positive thing not because it provides opportunity for character transformation (the basic biblical concept) but because it provokes an escape from the world of reason and relationships into the mystery of self. Prayer becomes less a conversation with God than it is an exercise in self-focused meditation.

Dostoevsky’s popularity has waned in recent decades. His dualism, dark moods and distorted characters are pretty tough to take in regular doses. Secular readers prefer sweeter themes nowadays. Even cynics have moved away from the dark writers like Kafka, Nietzsche, and Dostoevsky, preferring their skepticism colored in lighter shades...hues softened by such elements as Eastern religion, socialization, liberal politics and even self-help formulas.

And Christian readers? They were never that attracted to Fyodor Dostoevsky anyhow. And while they might be persuaded to share an evenings with curmudgeons like T.S. Eliot and Evelyn Waugh, Dostoevsky was just too much of a downer. Yes, there’s that marvelous chapter from The Brothers Karamazov, “The Grand Inquisitor,” that they read in college. They think that quite provocative and valuable. But for the long haul, they desire cheerier companions, Christian writers who demonstrate the fruits of the Spirit in their lives and work -- writers that acknowledge rationality, the divine revelation of Scripture which is authoritative and trustworthy, and the triumph of Christ’s atoning work.

Had Fyodor Dostoevsky kept the enthusiasm for life and love and optimism that he so compelling portrayed in “White Nights,” I have no doubt he would have remained not only in the pantheon of great writers but in the one dedicated to popular and beloved writers too. But he concentrated his search for truth in the turgid waters of emotion, suffering and the unknowable depths of psyche where few can (or even desire to) follow.
Posted by DH at 11:17 AM