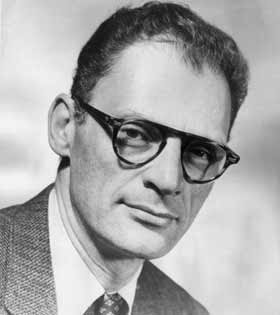 The American playwright Arthur Miller who died in February 2005 is remembered for many things: his most famous plays (Death of a Salesman and The Crucible), his marriage to Marilyn Monroe, his liberal social activism, etc. But there's something that is only now coming out about Arthur Miller that represents a personal selfishness and callousness that certainly contradicts his heretofore high reputation.

At the news of Arthur Miller's passing, the Denver Post called him "the moralist of the past American century." The New York Times praised his "fierce belief in man's responsibility to his fellow man." At his funeral, fellow playwrights Edward Albee and Tony Kushner celebrated his virtues, Albee even saying that Miller's life was a moral example for all of society -- "Here is how you behave."

But these praises would hardly have been as vaunted if people knew that Arthur Miller had completely abandoned his own son Daniel, consigning him to a cruel, loveless, unfathered life in mental institutions because Daniel was born with Down's syndrome, a condition for which he was punished by being wholly deleted from his father's life.

Below are excerpts from a well-researched, well-written Vanity Fair article by Suzanna Andrews. It was published last year. I hope it will encourage you to read her entire article. And I hope it will make you see more clearly the magnificent difference it makes (to individuals and the whole of society) when one truly values the sanctity of all human life. Thus, it's certainly not Miller of whom it should be said, "Here is how you behave" but rather people like Todd and Sarah Palin.

..."Arthur was terribly shaken—he used the term 'mongoloid,'" Whitehead recalled. He said, "'I'm going to have to put the baby away.'" A friend of Inge's recalls visiting her at home, in Roxbury, about a week later. "I was sitting at the bottom of the bed, and Inge was propped up, and my memory is that she was holding the baby and she was very, very unhappy," she says. "Inge wanted to keep the baby, but Arthur wasn't going to let her keep him."...

Within days, the child was gone, placed in a home for infants in New York City. When he was about two or three, one friend recalls, Inge tried to bring him home, but Arthur would not have it. Daniel was about four when he was placed at the Southbury Training School. Then one of two Connecticut institutions for the mentally retarded, Southbury was just a 10-minute drive from Roxbury, along shaded country roads. "Inge told me that she went to see him almost every Sunday, and that [Arthur] never wanted to see him," recalls the writer Francine du Plessix Gray. Once he was placed in Southbury, many friends heard nothing more about Daniel. "After a certain period," one friend says, "he was not mentioned at all."...

"Southbury Training School was not a place you would want your dog to live."

When it opened, in 1940, Southbury was considered one of the best institutions of its kind. Set on 1,600 acres in the rolling hills of central Connecticut, it was magnificent to behold, with porticoed, neo-Georgian red-brick buildings surrounded by endless lawns. It had a school and job-training programs, and its residents were housed in "cottages"—with their own living areas and kitchens. Well into the 1950s, Southbury was so highly regarded that wealthy families in New York City would buy country homes in Connecticut to establish residency so that, for a minimal fee, they could place their children there.

By the early 1970s, however, around the time Arthur Miller put his son there, Southbury was understaffed and overcrowded. It had nearly 2,300 residents, including children, living in rooms with 30 to 40 beds. Many of the children wore diapers, because there weren't enough employees to toilet-train them. During the day, they sat in front of blaring TVs tuned to whatever show the staff wanted to watch. The most disabled children were left lying on mats on the floor, sometimes covered with nothing but a sheet. "In the wards you had people screaming, banging their heads against the wall, and taking their clothes off," says David Shaw, a leading Connecticut disability lawyer. "It was awful."...

Bowen recalls the first time she met Daniel: "He was just a delight, eager, happy, outgoing—in those days even more so than now, because of his isolation." He showed her his room, which he shared with 20 other people, and his dresser, which was nearly empty, because everyone wore communal clothing. "I remember very clearly trying to respond with happiness, but it was very hard, because there was nothing there," she says. "He really had nothing. His sole possession was this little tiny transistor radio with earplugs. It was something you'd pick up at a five-and-dime. And he was so proud to have it. You couldn't help but think, This is Arthur Miller's son? How could this be?"...

In 1985, the U.S. Department of Justice sued Connecticut over the poor conditions at Southbury. The following year it ordered the state to close Southbury to new admissions. By then, Daniel was living in a group home with five housemates, and making huge strides. He had a lot to learn—how to live on his own, how to use public transportation, how to shop for groceries.

Experts say it is difficult to measure how much Daniel had been held back by years of living in an institution. Early-intervention programs, nurturing families, and special-education classes—all of which Daniel missed out on—have contributed to a 15-point rise in the I.Q. scores of Down-syndrome children in the last 30 years, says Stephen Greenspan, a professor of psychiatry and former president of the Academy on Mental Retardation. Today, many higher-functioning Down-syndrome children can read and write; some graduate from high school and even college. Chris Burke, the actor with Down syndrome, who played Corky on the television show Life Goes On, lives in his own apartment in New York and commutes to work. Daniel, by contrast, had to learn basic reading skills. He had to work on his speech, and people say it is still difficult to understand him unless you know him...

Today, Daniel Miller lives with the elderly couple who have long taken care of him, in a sprawling addition to their home that was built especially for him. He continues to receive daily visits from a state social worker, whom he's known for years. Although his father left him enough money to provide for everything he needs, Daniel has kept his job, which he loves and "is very proud of," according to Rebecca, who visits him with her family on holidays and during the summers. "Danny is very much part of our family," she said, and "leads a very active, happy life, surrounded by people who love him."
Posted by DH at 11:45 AM